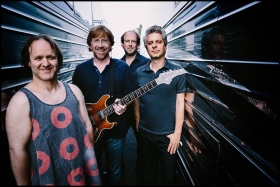 A few weekends back my lady and I jumped in the car after work on Friday and took in Phish’s two night stand in Worcester, MA at the DCU Center. I’ve never seen the band there, but the room goes back a ways in Phish lore and is said to be a space that always brings out the best in the band, high praise indeed for a place that normally houses minor league hockey.

If you’re reading this but you’ve never seen Phish live before, it might be too late to convince you to do so. Maybe you’re an old dog afraid to learn a new trick. Maybe you’re jaded. Maybe you’re short on concert cash. Maybe you live in a place like South Dakota or Alabama where the band just never plays. Maybe you believe the rumors. But I can assure you that seeing Phish live is a concert experience unlike any other. And I’ve seen a few concerts. I’ve often told my father, who I know would never be caught dead at a Phish concert but absolutely loves live music, that if he could ignore the obnoxious fans and their strange hypnotic swaying, he’d genuinely enjoy the music. Be impressed by what the band can do. Phish is one of, if not the greatest improvisational rock band of all time. And I’m including all the other great ones in the mix when I say that. And no, I’m not being hyperbolic. I’ve just listened to a lot of music and thought about it a lot. Phish deserves mention in the pantheon of improvised music, regardless of the esteemed company they’d be asked to keep. As their fan base ages and their relevance wanes (Phish will never enjoy the cultural kitsch of the Dead, alas), I worry that their legacy will be far smaller than it should be. For their music reaches levels of joyful virtuosity that I’m at a loss to find a superior to outside of jazz (whose greatest practitioners I don’t mind saying, are on a whole different level.) A band so great deserves more.

I first saw Phish at Saratoga Performing Arts Center in the summer of 1995, right after I’d graduated from high school.  Seven of us piled into a Civic hatchback and drove the two hours each way from Oneonta, New York to SPAC. The band was then so unknown to me that I actually thought they were Rusted Root during most of the first set, having listened to a friend who claimed RR was the opener (not knowing that Phish always tours alone). At one point, I asked “when does Phish start?” only to have my friend say, “this is Phish, asshole.” That show is a fond memory but didn’t necessarily spark my love for the band and its bizarre, addictive music. That happened in college.

My college roommate Mike spun Phish bootlegs from breakfast, lunch, and dinner our freshman year. I hated the music at first and I dreamed of killing first my roommate, and then the members of the band. The music just sounded like a horrible screeching blob to me. Whiny, out of control. Too fast and wild and unpredictable to enjoy. But the more I heard, the more the chaos began to separate, and when it did it broke into melodies and songs and I began to pick out bits of beauty, humor, oddity, even genius. There were musical parts of astounding complexity and cleverness, and some of most supple and lithe guitar playing I’ve ever heard (courtesy of Trey Anastasio). If any song did it that year, it was the version of “Stash” from A Live One, the band’s first official live release. Listen to it. After that I fell for “You Enjoy Myself” and “Reba” and “Gumbo” and other Phish staples. The more I heard, the more I perceived a secret club, one I didn’t necessarily want to be a full time member of, but one I knew I’d enjoy visiting from time to time.

When I met my wife, she just happened to be an on-again, off-again Phish freak, having seen the band thirty times already by that point. We started to see the band together when they were nearby and that was that. I let down my guard, stopped worrying about the drugged out hippies that sprung up like mushrooms and wanted my ticket for free before the show and wanted to sell me grilled cheese after. I mean, who were these people? I’d heard about the Dead’s fans, dedicated masses who traveled from place to place with the band, recording its shows like gospel and trading the tapes, gorging on variations of the same song. But I’d never seen musical love like I saw from Phish’s fans. It was a little weird, but more than anything it was kind of beautiful. It made me jealous. I wanted to love music that much. The band’s unique sensibility and vast and quirky song catalog inspired a level of dedication worth of tunneling into, and which often seemed to result in a sort of insider’s addiction. Loving Phish become a sort of secret knock.

It also became a punch line. Hipsters and doubters have always looked down on Phish, assuming their fans are deluded and their music subpar. But fuck them. I’ll write about them later.

Over the years I’ve been to probably twenty plus Phish shows, no grand number compared to any number of more dedicated or obsessive fans–my friend Leah has seen well over a hundred–though that twenty is still a good five times more than I’ve seen any other band or musician. I’ll keep going until they stop.

When we drove down to Worcester, I hadn’t seen the band in a couple years and though I was tired from a long week teaching, I was buzzing for the buzz. We just made it into the DCU Center before lights out. And out they came.

Honestly, these days, at times it’s hard for me not to feel like the band isn’t treading water a bit. They’re now thirty years into this thing. They’ve broken up officially once, but more like twice, and at times you wonder if the personal chemistry is still there. There were some moments in the first set on Friday night where I could honestly feel them not playing with focus and passion. Like they were watching the clock a bit. Trey was particularly sloppy in that first set, botching lyrics and guitar parts beyond the playful, experimental norm. Mediocre Phish is still far better than the energy and variety you get from nearly any other band, but they set the bar so high, anything less leaves me distracted. And going into set break, that’s how I felt.

And then the second set completely blew my mind. All it takes is one good jam and all is forgiven. And the second set was absolutely dripping with them. I won’t geek out and give you the play by play. It doesn’t feel like the right thing, and it’s hard to do Phish’s music justice with descriptions. Something about their chemistry, when it’s on and they’re flying, defies description or simple understanding.

The Greeks hold that perfection is attained not through exact harmony and balance, not through the simple balance of a square, but through the proper combination of contrasts. Through a balance of imperfection. Opposites working together to create a unique understanding, a rare harmony. Phish is sort of like that.

I could keep trying to explain it, but I’m not sure you’d understand.

PS…do yourself a favor and listen to this Tweezer from Tahoe from this summer. But if you do, really listen to it. Give it the time it’s worth. It’ll give right back.

This entry was posted in Music and tagged A Live One, DCU Center, Live Music, MA, Phish, Reba, SPAC, Trey Anastasio, Tweezer, Worcester, You Enjoy Myself. Bookmark the permalink.