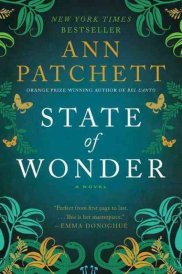 In Ann Patchett’s 2011 novel State of Wonder, she demonstrates how a writer can, and should, manipulate time to inform a reader’s experience and focus her attention. In a rudimentary sense, time = importance. By skipping briskly through time, for instance, a reader subconsciously infers that the story’s most urgent action is not currently happening, but coming, perhaps concealed just around the next corner/chapter. Conversely, such as in a long scene in the first chapter of State of Wonder, Patchett slows the story clock down to a crawl in order to draw the reader’s attention to the story weight the moment carries. In part, she does this in unsurprising ways, using description, conflict, and dialogue. What is surprising, though, and worthy of a closer examination, is how Patchett also uses repetition to quietly deepen our sense of who the characters are and how they will behave later in the story.

The scene opens in a suburban neighborhood where Marina Singh, the novel’s protagonist, along with her boss and (secret) lover, the aptly named Mr. Fox (think perhaps he’s devious?), have arrived at the home of Karen Eckman to deliver the awful news that Karen’s husband, Anders, is dead. And not only dead, but dead through suspicious circumstances in a remote section of the Amazon. Though the scene is quite early in the novel, for the seven pages Marina and Mr. Fox are in the Eckman’s household, time slows to a crawl. As they drive up, we get a long description of the Eckman’s neighborhood, as well as Marina’s internal wonderings about the finances involved in living there and how different her own life as a single woman is from her married colleague, a father of two. Then, after Karen Eckman opens the door and sees her husband’s colleagues standing there, clearly unnerved when she says “now this is a surprise,” Patchett withholds the reveal, building tension. We meet the family dog Pickles, who becomes a metaphor for the dead husband by scene’s end, and are treated to long descriptions of both the house itself, as well as the weather outside (it’s winter). We also glimpse a jungle gym through the window, a reminder that not only has Karen lost a husband, but two boys have lost a father. They just don’t know it yet.

When Karen asks if they’d like coffee, “Marina turned to put the question to Mr. Fox and found that he was standing directly behind her.” Meaning, of course, that Mr. Fox wants Marina to do the talking. At first we don’t make too much of this. But later down the page, Patchett repeats this character detail. “She {Marina} glanced back at Mr. Fox again…but Mr. Fox had turned towards the refrigerator now.” The repetition of the notion that Mr. Fox, who is not only the dead Anders’s boss, but the replacement male in this scene, shrinking back, thereby making Marina do the tougher, braver work, does two things. It tells us that Mr. Fox is perhaps cowardly, or at least deferential to a fault. It also tells us that Marina is, or will have to be, strong. It’s this latter character detail that Patchett gets the most use out of, for as State of Wonder progresses, Marina will over and over again have to dip into reservoirs of strength, bravery, and resilience she didn’t even know were there. Often, too, she has to do because Mr. Fox is (symbolically) hiding behind her.

Patchett continues to mine this tension through repetition as the scene develops. When Karen finally stops rambling and tending to the dog and says, “this isn’t good news, right?” Marina thinks to herself, “this was the moment for Mr. Fox to tell the story, to explain it in a way that Marina herself did not fully understand, but nothing came…Mr. Fox had his back to the two women.” A page, though perhaps only moments, later, Marina thinks “surely it was Mr. Fox’s part to give Karen the letter {in which she and Mr. Fox had learned of Anders’s death}…but then with a fresh wave of grief, Marina remembered that the letter was in her pocket.” Patchett is shrewd here. The main character is thinking one thing, that she’s doing what Mr. Fox should be doing, but Patchett’s goal is to both transfer power and responsibility, but also to prove Marina as a strong person who will rise to an occasion, demonstrated through this letter, an object Patchett uses to great effect here by placing it in Marina’s path.

Once Karen Eckman has absorbed the horrible news and read the aforementioned letter, again we are reminded of Mr. Fox’s lack of ability to engage in this most urgent moment. “The two of them were alone in this,” Marina thinks regarding she and Karen. The reason? “Mr. Fox had been driven from the room by the sound, the keening of Karen Eckman’s despair.” The repetition has built towards his very removal, enforcing the twin notions of female strength/companionship and absent men, which will both play central roles in State of Wonder.

Towards the end of the scene, after Marina has left Karen briefly to try to figure out what to do, who to call to support her and how to tell the Eckman boys, she returns to the kitchen to find Mr. Fox has finally stepped in and is “petting Karen’s head with a slow and rhythmical assurance” trying to put her at ease. He’s too late, though. The damage is done. And as Marina and Mr. Fox are driving away from the house, Marina thinks about how “she certainly blamed him {Mr. Fox} for leaving her alone to tell Karen.” She then wonders a heavier, more damning thing: “Did she blame him for sending Anders to his death in Brazil?”

By the time you’ve read State of Wonder in its entirety, this long, held moment early in the novel only grows in importance. Patchett slows down time and uses a range of craft elements, repetition most dynamically, to build character and introduce conflicts that will surface through the book, making this early moment a microcosm of who these characters are and how they will respond to difficult situations. Finally, it’s worth noting that Patchett’s use of repetition also achieves a great sense of contrast, for the focusing on Mr. Fox, important as it seems about him as a character, actually reveals even more about Marina, the novel’s heroine and most sympathetic and deeply developed character. In fact, the closer you look at this scene, the more you’ll wonder: how does Patchett do so many things so well at the same time? Writers of all stripes would be wise to study Patchett’s use of slowed time and repetition and try to borrow a bit of her craft mojo in their own work.