I ventured up to Montreal last week to catch the third round of the Roger’s Cup tennis tournament. The Roger’s Cup is part of the Emirates Airlines U.S. Open Series and an ATP Masters 1000 tournament, which basically is a fancy way of saying that it’s a big time event at which players stand to earn serious prize money and ranking points and therefore attracts the best players in the world. It’s also only two hours from my house, which makes me having never gone seem really stupid. Montreal and Toronto both host Roger’s Cup tournaments simultaneously and the genders alternate every year. This year the men were in Montreal.

When I was a kid living in Indianapolis, there was a big tennis tournament downtown called the RCA Hardcourts that attracted marquee talent and I saw Courier, Martin, and Sampras back in the day, but not only has it been many many years since I’ve seen pro tennis in the flesh, I am a far bigger and more astute fan of the game now. I’m also writing a novel that’s largely about tennis, so there was a minor research component to the trip.

I bought tickets for both the day and night sessions and all told I saw nearly six full matches and watched close to ten consecutive hours of tennis. And in one day I saw Rafael Nadal, Jerzy Janowicz, Andy Murray, Juan Martin Del Potro, Milos Raonic, Laender Paes, and Novak Djokovic. Damn.

Here, in no particular order, are some observations on the day.

1. Even from a couple hundred feet away, you can see the intensity burning off of Nadal like steam off blacktop after summer rain.

2. Murray, great a player as he is, just ain’t that handsome. Trust me, I saw him play doubles from twenty feet away.

3. Tennis, though international, is seriously white. I saw players from all over the world, but India’s Leander Paes was the only player I saw the whole day with skin darker than a vanilla latte.

5. I was foolish to think I’d be the only one there with a Roger Federer hat. They were as common as Yankees caps in the Bronx.

7. You have never seen anybody hit something as hard as Janowicz and Raonic hit their first serves. It looks fast on television, I know, though that idea of speed you get from TV does sparse justice to the cannons that these guys actually fire.

8. #7 makes you, then, fully appreciate how superhuman a top player’s reflexes and reaction time really are. Before watching for the day, I’d thought that the raw power, and seeing said power in the flesh, would be the most impressive physical thing on display. Wrong. The reflexes and timing are insane and absolutely shocked me.

9. Even watching a top player practicing is thrilling. I stood and watched Almagro for a while. (photo below) You’re ten feet away and they just pound the ball like a crazed metronome. Almagro is intense by nature, it seems, but was particularly angry seeming while I and others watched him practice. Nothing even in the vicinity of a grin out of this guy.

10. Canadians are very cool for letting you bring your own food and drink into the stadium. A little old French Canadian couple in front of me during the day session had a whole picnic lunch they slowly devoured during the Nadal/Janowicz match.

11. American tennis is officially dead. By the third round, there was not a single American left in the tournament. Nor is there currently an American in the world’s top twenty. This is bad.

12. As cool as watching the marquee matches on center court is, it’s all about the outer courts. You’re basically court side and can even better appreciate the pace of the game and the athleticism of its practitioners. When I say you’re court side I’m not kidding. Here’s the coin toss moment before the Andy Murray/Colin Fleming VS. Leander Paes/Stepanek match. I took it from my seat with only a slight zoom.

13. In doubles, rather than play a win-by-two style Deuce, in the event of Deuce, they play a single point to decide the game in which the receiving team gets to decide who receives. This speeds up play.

14. The players carry around their own towels. On TV, it just looks like the ball kids are feeding the players towels from a massive house stash, but actually the players use the same two towels throughout the match and carry them back to their chairs during breaks, and then to the opposite end during changeovers.

15. Many players change their shirts during matches, though doubles great Daniel Nestor was the only one I saw who changed into a different shirt.

16. If you tilt the camera right, you can actually put yourself in the same frame as Nadal doing his post match interview with Pam Shriver. I’m the Mount Rushmore like face on the left; Nadal is the tiny, navy blue clad fellow on the court to the bottom right. 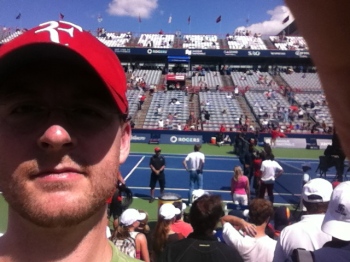 18. The gift shop swag is pretty crappy, and there’s basically nothing for kids.

19. There’s a lot of in and out during matches on the spectators parts. More, it seemed to me, than at other kinds of sporting events. I attribute this to the fact that there’s many matches happening simultaneously, and you can go see whatever you want at any time.

20. Because of #19, it can feel like you’re always missing something and wishing you could be two places at once. You often hear distant applause and wonder what you’re missing.

21. No line at the Canadian/US Border either coming or going = priceless.

22. I think next time I’ll still catch two consecutive sessions, though watch an evening session, stay overnight, and then the next day’s afternoon session.

23. It cost me around $200 to watch ten hours of elite level sport. If you consider that it would take four basket ball games to equal that quantity, the price seems pretty fair.

24. Though I was thrilled to see so many top players in person, Nadal, I have to say, inspired the day’s biggest man crush. Wow. I took a photo of him shirtless after the match for my wife. But I kind of wanted it too.

25. I can’t wait until my kids are old enough to bring along.