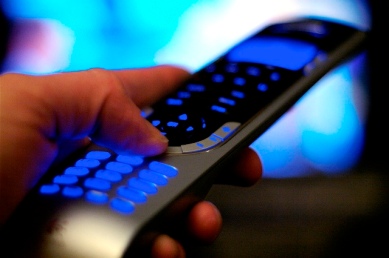 You’re sitting in bed trying to decide what to watch on Netflix. There’s a beer on the nightstand. A spouse beside you. You’re yawning, but it seems silly not to at least start something. After all, you’ve got so many choices at you’re fingertips. So you click on the Apple TV and start searching. And searching. But before long, there’s a restless jitter in your brain, a little thunder storm in your gut. And you know it immutably…you’re going to fail at this. The sheer quantity of choices renders you paranoid. What if you make the wrong choice?

Should you try Bloodline? You’ve heard that Narcos is good. Or perhaps something offbeat like Jane the Virgin. What are you in the mood for? You’re not quite sure, are you? You think back to what your co-worker told you you had to watch. Or what your friend couldn’t believe you hadn’t seen yet. Was it Westworld? Game of Thrones? Something like that, you think. What you know for damn sure is that you can’t watch them all–there’s simply too many–and so you better make it count. Time is life’s most precious non-renewable resource, and you’re sure as shit not going to waste any of yours watching, or even taking a chance on watching, something subpar. Why would you even dare? Not with so many choices.

You scroll the “New Releases.” Then the “Suggestions for You.” You cycle through the “Recently Watched” to see if there’s something you started last week that you forgot you started last week that you may or may not have liked. You remember you like Cosmos, but it’s so out there and brainy. You’ve heard that documentary about Design is pretty good, but are you in the mood for something so heady before bed? You’re tired, after all. You worked a full day, and you’ve got to thread that needle to end it just right.

Perhaps you’ve been going about this all wrong, you think. Maybe you’re not in the mood for a TV Show at all. After all, there’s been some great independent films released in the past couple years, haven’t there? You’re a little behind, so why not catch up right now? What was that one called, the one with what’s her name from Mad Men? Someone said it was pretty good, a little weird, but in a good way. You go to look it up on your phone, but then you remember there’s a basketball game on that you wanted to watch. Except you cancelled your cable subscription. You spend ten minutes clicking on promising links on your phone to find a bootleg stream of the game, but the one that seems like it would work isn’t compatible with your operating system, and the others all want you to download something sketchy, so you figure you better not. You toy with the idea of just buying the NBA League Pass so you can watch a game anytime you feel like it, but it’s expensive and the season’s over half over. You put your phone down. You’re supposed to be watching TV, remember?

You get another beer. Your spouse is nodding off. You go back to Netflix and figure you’ll try to search through Genres. You start with documentaries. You’ve always liked food shows. Are you in the mood for something artsy and brooding like The Mind of a Chef? Or a guilty pleasure like Beat Bobby Flay or Chopped? Except Chopped is kind of stupid, isn’t it? Or do you like it? You honestly can’t remember. But the decision matters. You know it does. This decision matters because you know that it’s one of a thousand tiny mirrors you’ll hold up this year that all ask you what kind of person you are. What kind of person do you want to be? Now, more than ever, you get to decide exactly who you want to be, all through the glorious power of choice, of options.

Maybe you’ll watch John Oliver on HBO. But you read a lot of news anyway, don’t you? What it it feels like a re-hash of what you already know? And what if by the time you realize you wish you hadn’t started it you’re too far in to commit to something else?

You run your fingers through you hair. Your back is a little sore from the way you’re sitting and how tense your shoulders are.

You’re getting tired now. That second beer is about gone. You click off the light and settle into you propped pillows. You finally just click on something, a drama you heard was good. It’s got what’s his name in it. From that show that you sort of liked. You take a deep breath. Good. You’ve decided. But now you’re tired and you don’t last more than a few minutes before you fall asleep. You wake up an hour later mid way through the second episode of the show, or maybe the third, which has automatically started, and you’re annoyed with yourself because you really wanted to watch this show. You heard it was good. Someone told you it was. Maybe tomorrow. You’ll do it right tomorrow.

Posted in Shaking My Head