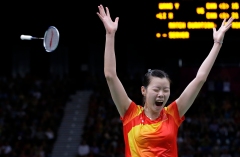 Last week at the London Olympics there was a kerfuffle over badminton, of all things.  Apparently what happened is that four of the top female badminton teams (China among them) lost games on purpose because, oddly, losing a game would prove beneficial in later rounds of the competition, potentially allowing them to compete against lesser teams later on.  In the case of China, the referee warned them during the match as they sluggishly whiffed and purposefully hit the birdie (shuttlecock) out of play or into the net, and the London crowd booed to show their displeasure, having no illusions about the pathetic excuse for a badminton match they were witnessing.  Swiftly, an investigation ensued and the teams were disqualified from olympic competition.  They were later zipped kicking and screaming into weighted bags and hurled into the Thames and never heard from again.  Okay, that last part isn’t true.

Here’s a video from the crowd during the Chinese match.  It’s shot on some pretty low quality equipment, likely a cell phone, and doesn’t display the full scope of the scandal, but it’s easy to hear the crowd’s dissatisfaction and knowledge of what they’re seeing.

I still haven’t decided what I think about this.

First off, why is there a competition where LOSING could prove advantageous?  There’s got to be a way to rectify that.  It seems pretty clear that if you’re China and you’re the best badminton team in the world, meaning you could beat everyone else, you’d only lose on purpose if there was some very real benefit for doing so.  Why would such a situation ever exist?  Try to imagine Roger Federer or the U.S. Women’s Soccer team losing on purpose because they could play someone easier in the next round and increase the chances of winning gold.  Try to imagine Ryan Lochte or Michael Phelps or Gabby Douglas losing on purpose for the same reason.  Clearly the badminton planners having their birdies out of whack.

But it happened, and now we need to make sense of it.  So, let’s talk about sportsmanship.  I’ve always liked the idea that how you accomplish something holds weight and contributes to whatever results you might achieve.  I think in the abstract most people do as well.  It feels good.  It means that I should comport myself in an honorable way at all times and that the journey is as important as the destination.  That if my journey is full of scandal and lies then my destination is corrupted.  In this line of thinking, a gold medal achieved after being unsportsmanlike, say, losing on purpose, would be tainted goods.  Would be dishonorable.  Right?  And yet, clearly four of the world’s best badminton teams and their coaches didn’t see it that way.  Why not?  What do they know about sportsmanship that the rest of us don’t?  It’s disheartening to think about a coach advising her players on losing as a strategy.  But maybe I need to stop being so naive and pretending like the olympic games bears any resemblance to my youth soccer league where we all got orange slices and a trophy for showing up.

So then, where’s the line between being a good sport and playing the game “right” and winning?  If there is one, it sure as hell isn’t straight.  It’s jagged and hard to follow and drawn with invisible ink.  Would we rather have athletes play “correctly” and lose, or do what they have to do in order to win?  Let’s face it, we are obsessed with winning.  The big W.  Last night I watched American sprinter Lashinda Deamus lose gold by four one hundredths of a second in the 400M hurdles and after winning silver, she collapsed on the ground crying tears of disappointment over being second best in the world.  Still don’t believe me?  Quick, name who came in second in the men’s 200M Butterfly at the Beijing Olympics.  Quick, tell me who came in second to Mary Lou Retton in 1984.  Yeah, I don’t know either.  In sports at large, and in the Olympics in particular, winning is the measure of success.

And yet, it’s complicated.  Sportsmanship matters to me and a lot of other people and I don’t see how the Olympics, or the Badminton Federation, can condone losing on purpose and not punishing it with some gesture on behalf of their sport’s veracity and honor.  Regardless of the semantics of “fairness,” it’s clear these badminton teams embarrassed themselves and their sport on an international stage.  Badminton purists around the world watched in horror, afraid their sport would be tainted and ignored because of these acts.  Relegated to the likes of table tennis and squash.  In this, I (mostly) support what was done in DQing the teams.  They had to do something.  Sportsmanship is not an abstract idea and even though we pretend there’s a huge gray area, it’s really pretty simple.  You either try your hardest or you don’t.  The problem comes with accountability.  Who do you blame?  The athletes?  These athletes train their entire lives for these moments.  They train for gold.  They train to win, not to play “right” or entertain the crowd.  Anything second to winning is a failure.  Especially in China.  So, if a system exists where losing on purpose increases their chances of winning, how can we blame these athletes for helping their gold medal chances?

Posted in Shaking My Head, Uncategorized