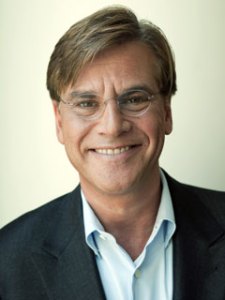 Man, I love the Internet.  Where else could you ever have access to the mad genius who spent God knows how many hundreds of hours assembling and cutting together a seven minute video of all the phrases that Aaron Sorkin (pictured at left) has repeated, and then repeated again (via his characters) throughout his career.  For those of you who don’t know because you’ve been stuck at the bottom of the ocean for the past fifteen years, Aaron Sorkin is a television and film writer responsible for The West Wing, Sports Night, Studio 60 on the Sunset Strip, the recent HBO series The Newsroom, A Few Good Men, The Social Network, and a whole bunch of other amazing shit.  Suffice to say, he’s the best writer of televised dialogue of his generation, maybe of all time.  And wildly, inhumanly prolific.  To boot: for the first four seasons of The West Wing, he wrote nearly every single episode.  A season of The West Wing is 22 episodes, each an hour long, which means that basically this guy wrote roughly 88 plays in four years.  And that was just 4 years. He worked himself so hard that he eventually had to leave The West Wing because of a pretty bad speed and cocaine habit, an event that surprised the sum total of no one.

I loved this video, and oddly, it made me love Sorkin even more, even though his writing can be idealistic and saccharine and repetitive.  You gotta love a guy who quotes himself this often and writes so much that he just can’t help it.
Reminds me of Woody Allen, who you could easily do the same kind of video with.